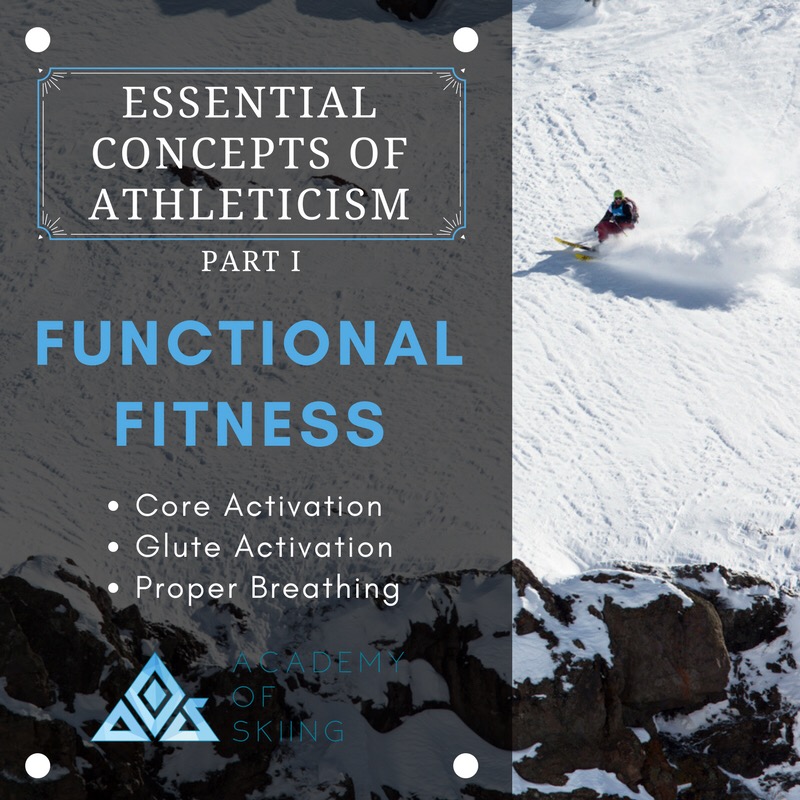 What is functional fitness? Why specify “functional“?

To start lets look at the definition of what functional fitness is:

noun
1.
fit·ness
noun
So why?
In a world where aesthetics are valued more than integrity and fads are rampant, the fitness craze is in full swing and serves different purposes for different people. For many men it’s about looking big and having a six pack, huge arms and a big chest. For many woman its about losing fat and looking like the woman in magazines. There’s nothing wrong with wanting that, but for me, I want to function on skis the best I possibly can. It’s all about learning to use my body effectively in every moment so that I can apply it when I’m on the mountain; therefore my focus is on functioning on the highest level for my goals. If I were 225 pounds, my ability to maneuver in the air would be drastically limited. That said if your goal is to be huge these techniques will still help you lift and function properly, stabilizing your back and oxygenating your cells properly.

First… Why do I think you need this? Having grown up ski racing, I’ve had personal trainers and gone to Olympic Training Centers in 3 different states. I grew up in the fitness world but never was really given the base information I needed to grow into the athlete I wanted to be until a year ago. I had experienced this ability to control my body properly in yoga indirectly years before and practiced it unknowingly, but a little over a year ago it was brought to the forefront of my consciousness. After practicing and implementing it in my life for over a year, I’ve seen HUGE changes in my ability to perform in a range of environments.

What led me to this discovery?

A series of “unfortunate” events…

On Feb. 28th of 2016 I broke my back. Laying under the tree I had just wrapped myself around I had one of the largest and fastest changes in perspective I’ve ever experienced. Not only did I realize how fragile life was, I realized it was time for me to regroup on fitness and create a better plan of attack. It has ultimately lead to the biggest transformation in my life, but that is for another time(check out my blog article on growth mindset).

Anyways, back to the fitness and what I learned about functional fitness;

After breaking my back I hired a personal trainer to help me rehabilitate after physical therapy and she showed me how disconnected my muscle groups had become. I could fire one group efficiently but not the entirety, especially my core(granted my injury had shut off my bodies ability to use the core muscles). I wasn’t as functional of an athlete as I thought, my brain and body first and foremost needed a stronger more conscious connection neuromuscular training is where we started. Consciously engaging in the function of my body by breathing and activating my core and pelvic muscles to keep my back protected we started to add movement and balance. I learned quickly that there were 3 main types of muscle activations that help me function properly as a human; Core, Gluts and Breathing.

Yoga had shown this to me before but it had been fleeting and I never incorporated it into my skiing.

After a year of exercising and studying functional fitness, this is my physical transformation, although it’s been much more than physical.

By practicing the 3 techniques I’m about to outline with Ginny Turner and Trent Heights, your body will develop functionality in ways that you’ve felt before, you’ll find your posture changing, people treating you differently and even more energy.

No I’m not joking… At least things things have happened for me over the last year and I believe they can happen for you.

So without further ado, here are those three practices in functional movement;

#1. How to plank and activate your core muscles for the strongest central conductor of movement.

Through this video, Ginny and I talk about the proper ways to engage your core through planking and how to apply this muscle engagement throughout your movements and exercises to make the most out of your bodies built-in engineering.

We talk about proper placement of your arms, feet, hips and some surefire ways to know that you are doing it correctly, as well as how to apply this same type of core activation and stabilization to all exercises. This one tip will change the way you think about your body and create massive differences in your posture and functionality.

How to Plank Properly

#2. How to breathe properly while working out getting explosive, aerobic or just functionally use your body and breathe at the same time.

In this video Trent and I talk about how to breath properly during exercise and I review some other breathing techniques I use when I’m doing cardio.

How to Breathe Properly

#3. How to squat and actively use your gluts and core in dynamic movement

In this video Performance Coach Trent Heights and I talk about how to properly squat and deadlift, the main parts of the core that and gluts that you should be activating on a daily basis while moving and performing activities like this and more.

How to Deadlift properly
How to Squat properly

If you actively use these three techniques throughout your daily routine and especially in your fitness routines or during exercise you are guaranteed HUGE results(it could even help your sex life if applied correctly.)

Using these 3 techniques you will see your body function more properly, with less pain and you’ll even gain more reaction time.

Like I recommended earlier for the best results and because it’s good practice; Try incorporating these for the next week, be mindful and document any changes you feel in your posture, mood, confidence, functionality, pain etc. in a journal as frequently as you notice the changes.

Thanks for the read, I hope you find these videos super informative and if you have any questions don’t hesitate to ask!

Owner/Founder of Academy of Skiing

“If you’re not having fun, you’re doing it wrong.”